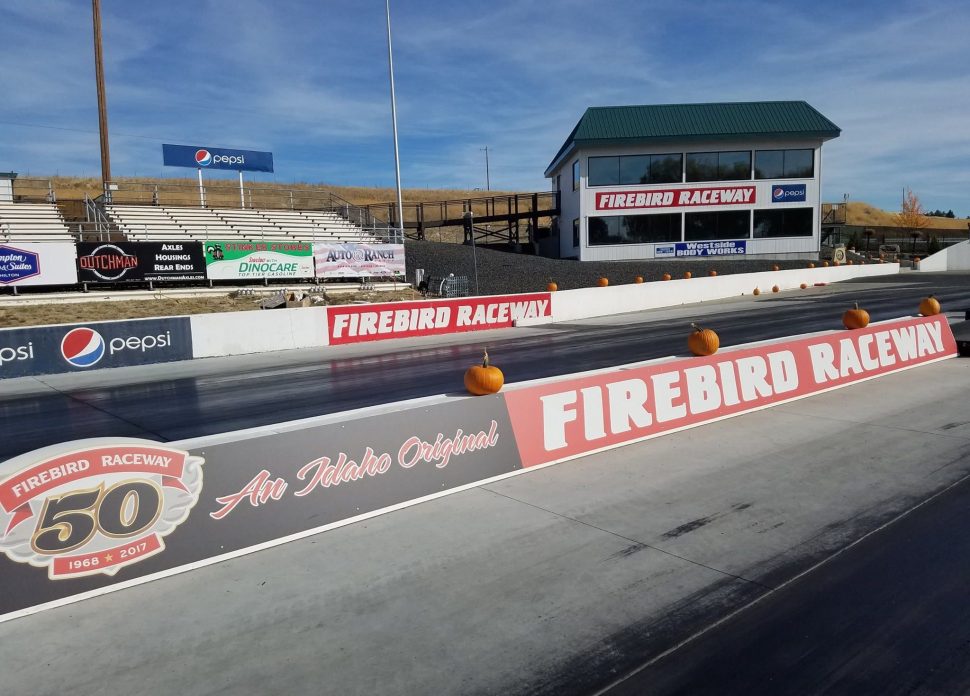 Despite the relatively new grandstands and timing tower, not a whole lot has changed at Firebird Raceway in Idaho’s Treasure Valley since it was built in 1968. Sure, the grandstands and timing tower are new, but the drag strip has remained in the same family for 50 years and retains much of its original equipment — down to the Christmas tree — as well as its hometown charm, which helped ensure the facility a spot on the National Register of Historic Places, marking the first time the list has recognized a drag strip.

Idaho’s history with drag racing, according to Firebird Raceway’s National Register of Historic Places nomination form, stretches back to 1954 when supporters of the new sport began racing on two former air strips in the state. Racers in the eastern portion of the state took to an abandoned air field near Pocatello while the Bootleggers car club organized races near Gowen Field, just south of the Boise airport.

Bootleggers member Bill New developed such a fascination with the sport that he moved to Southern California to be closer to the action. By the early 1960s, he returned to Idaho to discover that the Bootleggers were no longer organizing the Gowen Field races, so he began to scout locations for a permanent drag strip, one that would benefit from his experience and observations in the epicenter of West Coast drag racing.

His search eventually took him to a former homestead just off Route 16 in the Treasure Valley north of Boise and Nampa. The location allowed for a north-south drag strip (perfect for keeping the sun to racers’ backs and out of their eyes) of a quarter-mile long with a terrain of gently sloping hillsides that would be perfect for audience seating near the starting line, New figured. More importantly, it was far enough away from civilization to keep it from being considered a nuisance.

“The property was perfect for a dragstrip,” according to the application. “Its location was central to Ada County and was ideal relative to the projected future growth trends of the populations of greater Ada, Canyon, and Gem counties.”

New had, in fact, rejected other locations for the drag strip closer to Boise based largely on their proximity to existing housing. “The raceway complex was specifically planned and designed to be located away from residential properties because of the very noisy nature of the sport.” 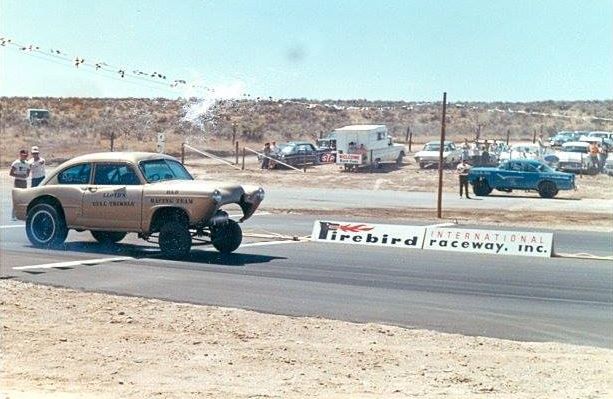 New’s new drag strip, Firebird Raceway, wasn’t the first dedicated drag strip in the state. Pocatello operated until 1973 based on a lease from that city, and Thunder Ridge Raceway opened in nearby Star in 1967. Firebird, however, obtained NHRA sanctioning early on and New managed to get Bob Riggle to bring his Hemi Under Glass wheelstander Barracuda to opening night in July 1968. 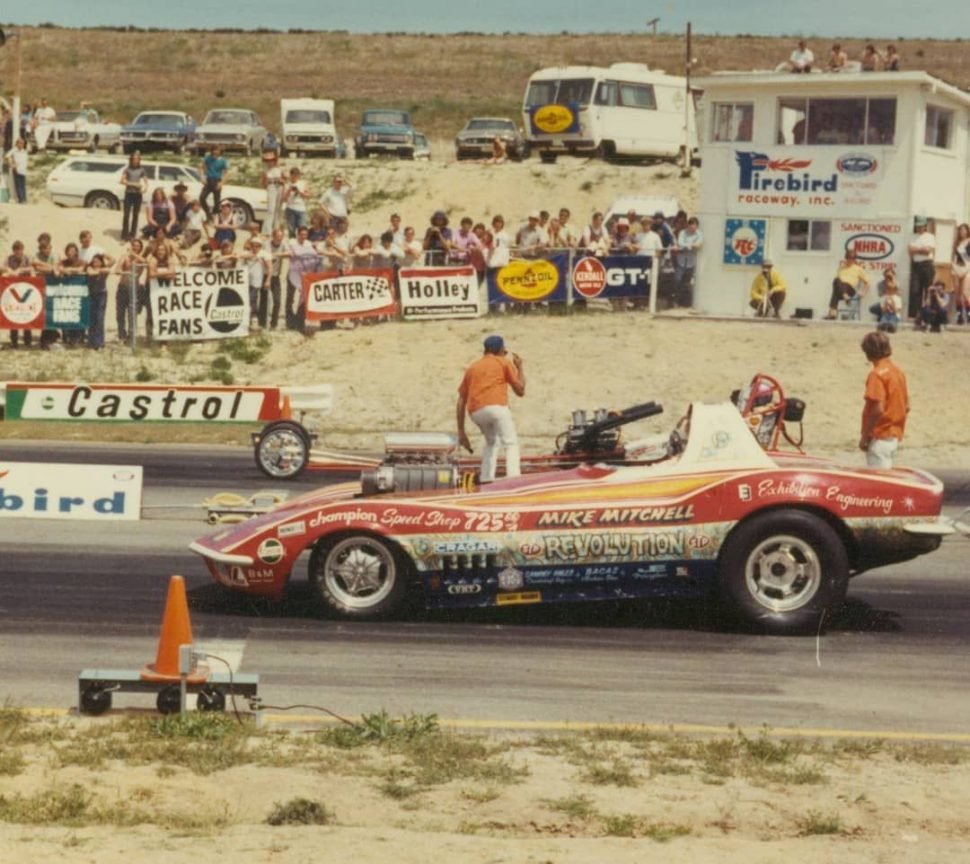 The “World’s Fastest Hippie” Mike Mitchell competing in Comp eliminator with his BB/A Corvette at Firebird in the early 1970s.

While the drag strip has attracted many of the sport’s top drivers — everybody from Don Garlits to Shirley Muldowney to Tommy Ivo — Firebird also claims to host the country’s oldest continuously running bracket racing tournament and one of the country’s longest running high school drag racing programs, in which students can actually letter in the sport of drag racing. Both programs began at Firebird in 1976. 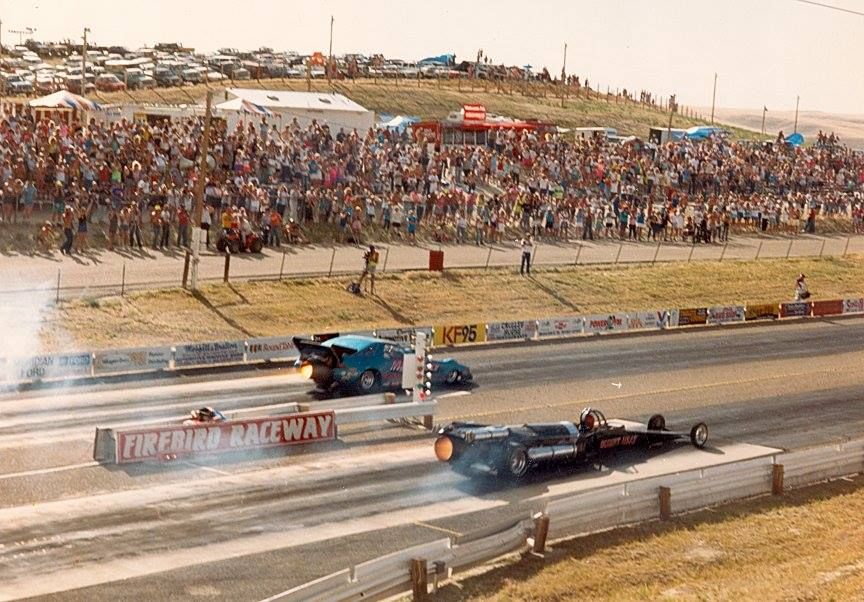 Firebird has modernized over the years, albeit slowly. The timing stand remained a simple shack on corner posts until 2010 and the aluminum grandstands on the hillsides only replaced the wooden ones in 2017. That original Christmas tree does date back to 1968, but was upgraded to electronic operation in the late 1990s.

According to a statement that track manager Scott New posted to the Firebird website, the inclusion of the track on the register is the culmination of a three-year process. “The New family is so proud and we know this acknowledgement serves to underscore all the hard work our founder, the late Bill New and his wife Ellanor, accomplished when they first built and cultivated Firebird literally from the ground up in 1968,” Scott New wrote. “At the same time, this fortifies, bolsters and strengthens Firebird’s footprint in western Idaho for many generations.”

These days, despite Bill New’s intentions, development has started to creep up on Firebird from the south and the west and residential housing now abuts the Firebird property.

Placement on the federal National Register of Historic Places does not necessarily protect a property from development, but it does make the property eligible for tax incentives and grants intended to help preserve historic properties.

At least nine motorsports facilities or properties associated with motorsports history have been added to the National Register of Historic Places, but none of those properties were built for drag racing.

The National Park Service added Firebird to the National Register of Historic Places on December 24, but was unable to announce the addition until earlier this month due to the federal government shutdown.

Stay connected to our dealership!

How Can We Help?

Just fill out the comments section below and submit it to us!

Use the form below to contact us with any questions or comments.